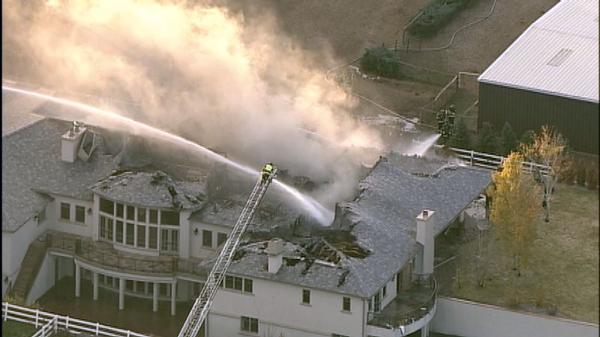 It began with two carpenters who shared a longtime friendship and a dream to turn a Greenwood Village mansion they built into riches. Five years later, after a spectacular but suspicious fire that flattened the mansion, three men are charged with conspiring to defraud the bank that backed the deal.

The saga of 5301 S. University Blvd. and the men who built the 15,000-square-foot, six-bedroom, nine-bathroom estate is a tale of big money, double dealing and business gone bad.

“There’s fraud, there’s deceit, there’s money, there’s chicanery. It’s all here,” said Noel Lane, one of several businessmen with ties to the project. “This . . . would make a fabulous TV movie.”

In 2005, accomplished craftsmen Mikel Mewbourn, 40, and Peter Brody, 58, believed they could turn their carpentry talents and a 16-year comradeship into a profit-making venture.

“We were carpenters, foremen and project managers on residential and commercial jobs,” said Brody, of Arvada. “Until this fiasco, he was executor of my will. . . . I trusted him with my life.”

At the time, easy money was the norm.

“We wanted to get someone to invest with us in a fix-and-flip business,” Brody said, explaining the idea to buy undervalued residential real estate, make renovations and then quickly resell it at a profit.
When Brody unexpectedly inherited about $100,000, their operation, M&B Development Inc., had the earnest money the two friends needed to shop for properties.

Mewbourn, who is one of the men charged with conspiracy, isn’t talking. The two other men who are charged are Matt Witt, an investment manager, and Denver Haslam, a partner brought in by Mewbourn.
Brody said he left the job of locating investment properties to Mewbourn because “I’m more hands-on and he’s more the people guy.”

The pair sought an investor to front the additional money needed to land a construction loan.

Witt had a massive bankroll of projects topping $150 million in several states, including Colorado. His company, Commercial Capital Inc., was a lender for difficult projects at terms of just a couple of years. Court records show CCI’s money didn’t come cheap, often at double-digit interest rates and upfront points that also topped double digits.
Witt, 42, said allegations against him are untrue.

“I don’t have anything to say other than I was president of CCI,” the Highlands Ranch resident said.

Investigators paint a picture of a financial wizard who minimized his exposure yet tried to maximize the return. It was classic “other people’s money.”

The first CCI loan — $1.5 million to M&B to buy the land — came in July 2005, according to investigators and court records.
That would be refinanced in a series of other loans. In the first, CCI partnered in January 2006 with First United Bank in Greenwood Village for $2.9 million to come due in January 2007.

In a second, CCI partnered in August 2006 with a private investor for another $500,000. That same day, CCI rewrote its first loan to reflect what M&B owed it: $1 million.

The project was underway.

“We were in a decent market, before things started to get odd in real estate,” Brody said.

No expense was spared: handmade solid cherry doors throughout the home; $60,000 in hardwood floors with precision hand-inlaid accents from a Russian craftsman; a grand ballroom; a $30,000 wine cellar; servants’ quarters; radiant heat in all the flooring; a de-icing system for all decks and patios; stonework brought in from New Mexico and custom-cut on site.

“It just steamrolled from the original deal of putting in $1 million and selling it for $2.5 million,” Brody said.

The sales price of the home would balloon to $8.2 million. It wasn’t long before the fever of profit began to overtake the principals, Brody said.

In his case, he thought of a new pickup truck. In his partner’s case, it was a bit more.

“Mike starts talking Ferrari and then just shows up with this hot 12-cylinder one day,” Brody said.

Mewbourn had leased the vehicle, saying he’d gotten rid of a custom Corvette. Brody said copies of the title history showed it once belonged to actor Denzel Washington.

Money was flying out the door, and Brody later accused his partner in a lawsuit of misspending funds. He said the uncomfortable largess came from overdoing the project. Witt’s response to the worries, according to Brody: “Trust me. It’s what people want.”

Despite desires to sell the property to a Denver-based sports figure — former Avalanche goalie Patrick Roy had lived nearby — there were no takers. It languished on the market for months.

And the $2.9 million loan to construct it, unpaid since it was signed in late 2005, was past due and bearing down on them. Foreclosure was set for March 2007.

Skiing-accident survivor Denver Haslam was a bright, good-looking fellow who graduated from the Colorado School of Mines in 2001. He turned a mechanical-engineering degree into a systems engineer job, a gig that lasted nearly six years.

Along the way, Haslam made headlines when he miraculously survived a skiing accident at Arapahoe Basin in 2003. He lost control on the slope and slammed into a stand of trees.

By all accounts, Haslam should have died. But a helmet and some dedicated medics in an ambulance and at St. Anthony Central Hospital saved him.

He would use the notoriety to promote the use of ski helmets whenever he could, often through his college fraternity, Beta Theta Pi.

It was his fraternity work that hooked him up with Mewbourn. Haslam helped Mewbourn land the job to build a new frat house on the Mines campus, the alumnus told investigators.

By December 2006, Haslam was out of work, the result of layoffs, and started depleting a $300,000 IRA he had amassed.
Despite the setback, Haslam agreed to help Mewbourn get out from under the economic jam the mansion had created for him. He would do it by loaning Mewbourn his good credit, which Haslam described to investigators as “a great deal of purchasing power.”

Haslam told investigators he agreed to purchase the mansion and, in addition to relieving Mewbourn of the crushing debt, share in any profits when the mansion sold again.

As part of the deal, Mewbourn would teach him about real estate development, a plan they solidified by together forming Rocky Mountain Development Group Inc.

Haslam’s lawyer, , said Haslam “lacked sophistication” and was taken advantage of during a personally difficult time.

So how does an out-of-work guy who had made $65,000 a year and owned a modest Park Hill home get a multimillion-dollar loan for a Greenwood Village mansion?

It’s easy if someone ponies up a multimillion-dollar down payment for him and, as a result, the lender doesn’t confirm his income. That someone, according to investigators, was Matt Witt.

Using his connections to the banking world, Witt allegedly completed and submitted Haslam’s loan application to Affiliated Financial Group, a mortgage lender in Greenwood Village that was backed by IndyMac Bank, which would later implode in the looming subprime mortgage market meltdown.

In the loan paperwork, investigators say, Haslam is listed as providing a $3.29 million cash down payment on the $6.29 million sale.

An Affiliated official told investigators Haslam told her it was trust-fund money he received from the skiing accident that nearly killed him.

“I am not confident Denver made the statement that someone attributed to him,” his attorney said.

In actuality, the $3.29 million down payment was an unrecorded loan to Haslam from CCI that also didn’t appear in any of the loan paperwork from Affiliated. Police say the money was wired from CCI to the title company handling the closing, used as the down payment, then rewired to other CCI projects in other states.

Brody not told of sale with the loan approved, IndyMac, via Affiliated, handed over $3 million to the primary property lien holders, First United.

That left $1.5 million in loans outstanding — $1 million to CCI and $500,000 to one of its investors. Those were rolled into the loan that made up the down payment, records show.

An official at Affiliated said its loan would not have been approved had Affiliated known the down payment was loaned money and not Haslam’s.

Money in hand, Haslam’s purchase closed March 8, 2007 — two days before the First United construction loan was to foreclose.
One key issue that would become a big problem later: No one told Brody about the sale.

“It wasn’t until four months later that a friend found it had sold,” Brody said.

Stunned, he said he approached Haslam hoping to retrieve his original $100,000 investment.

Instead, Haslam told him Mewbourn claimed Brody had walked away from the project.

“He said not to worry, that my money was protected,” Brody said. “That’s when I hired a lawyer.”

Brody sued in January 2008, called the sale to Haslam a “sham transaction” and demanded his investment back, records show.

Five days after Brody sued, the $3.29 million CCI loan to Haslam that made up the down payment was recorded in Arapahoe County, records show.

Haslam, for his part, didn’t make a single payment on any of the loans that bore his name. Those came from Witt-owned CCI. Haslam told investigators he was “a means to an end,” court records show.

In March 2008, Haslam obtained a $4 million insurance policy on the mansion, court records show. To fulfill the terms of the policy and the mortgage, Haslam told several investigators it had always been his intent to move in and call the mansion home.

“He at no time intended anyone being defrauded,” said his attorney, Marks.
But Haslam never moved in. And all the while, Mewbourn and Witt — Brody had stopped his involvement — were trying to get the mansion sold.

A buyer finally appeared in mid-2008: developer Noel Lane from Conifer. He was already doing business with CCI on another project and, according to court records, agreed to buy the house as a way to land a much larger CCI loan for a project in Estes Park.

The problem, though, was closing the deal with Lane, because Brody’s lawsuit in Arapahoe County meant a prospective buyer couldn’t get a clear title.

“That notice I filed upset it all,” Brody said. “It was my leverage.”

On Nov. 3, 2008, Haslam, Mewbourn, Lane and Witt met at the mansion to discuss the situation, records show, though no details of the conversation have emerged.

Three days later, on Nov. 6, the house was aflame. Television coverage was extensive, as was speculation surrounding the blaze.

A full 5-gallon gasoline can was found on one side of the basement; a locked natural-gas line was disconnected from a boiler on the other. Neither ignited.

The fire began in a kitchen hallway pantry where an accelerant had been poured, records show.
No one has been charged or arrested in the fire.

In the rubble of the aftermath, the principals each have faced challenges.
Witt’s company, CCI, filed for bankruptcy protection in April 2009.

A month later, Brody dismissed his lawsuit, settling with Witt, Haslam and Mewbourn for a total of $50,000, records show.
Haslam is a speaker for Motivation By Inspiration, his LinkedIn website page says.

If convicted of the felony charges in Arapahoe County — each is accused of fraud and conspiracy against Affiliated and IndyMac — Witt, Mewbourn and Haslam would face up to 12 years in prison and $500,000 fines on each charge.

The mansion? Pushed over by a bulldozer. The lone remnant of the once-spectacular home is a four-pillared trestle standing sentry over a massive weed-strewn lot with a terrific view.

“It’s a property with a bad history,” said Brody, now a flooring salesman. He visited the site recently for the first time since the fire.

“It’s upsetting to see it, and I feel stupid at how gullible I was,” he said. “I’m just not wired to take advantage of people.

“Money changes them to the point that friendships don’t matter.”